Entrance and Exit - my first watercolour of 2022 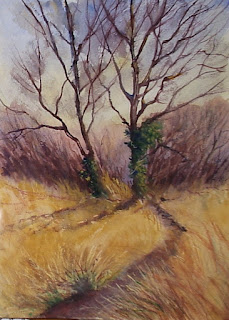 Posted by Robert's reflections at 07:17 No comments:

The Other Side of the Bay

Managed to photograph this 12" by 14" oil at last - had to take it with the flash in the end, hence there's some glare. 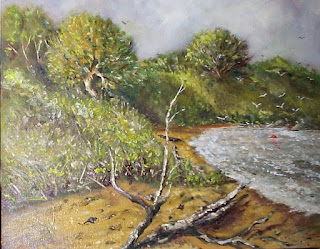 EIGHTEEN inches by fourteen, you'd have thought the scale of it would have told me if my ability to read the notes on the back of the board hadn't.......

Posted by Robert's reflections at 14:01 No comments:

This, I emphasize, is a sketch - rapidly done in oil, when I was preparing to paint an acrylic version of Mr Corbyn.

I would have hugely preferred to paint him from life - painting portraits from photographs is a mug's game which is almost impossible to get right.  But this was technically interesting to me, in that I used Cremnitz White, a lead carbonate which made a massive difference in being able to mould the shapes of (sorry Jezza!) ageing flesh.

I'll show the acrylic portrait eventually, but I feel now that I ought to repeat the bigger portrait in oil - again with lead white, because Titanium (a very useful, opaque, clean white though it is) just doesn't hold a candle to lead white in painting flesh tones. 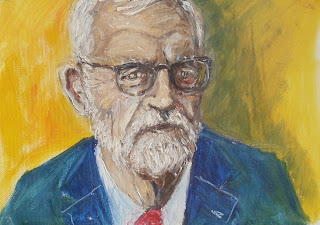 Life and Death, Up on the Downs 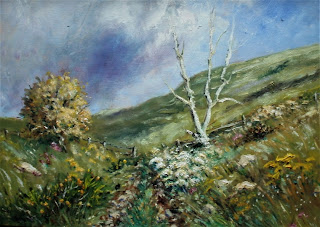 Oil on birch panel, around 40cm by 32 - this is the development of the work in progress I posted earlier.

The latest acrylic - which I put on the Facebook page with the wrong dimensions, and can't see how to correct it in the boosted post.

But - it's 16" by 12".  And available for sale, as is some of the previous work shown on this blog-page.  Do not hesitate to inquire ... I shall respond with indecent haste. 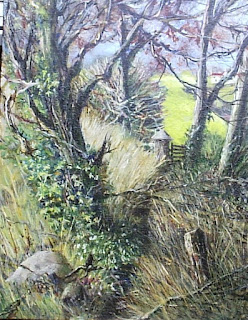 So much time lost in the service of my voluntary job - so little energy available to supplement it.

Really - why spend time on non-arty things?  I just can't keep up with it - I'm too bleedin' old!

Most of my arty stuff will be displayed on Facebook for the time being - Robert Jones, Isle of Wight Landscapes.  Not all of the landscapes ARE Isle of Wight, but most of them will be.

I'm sorry not to have kept my various pages up to date, but - that's depression for you.  It's just horrible - never let anyone tell you different! 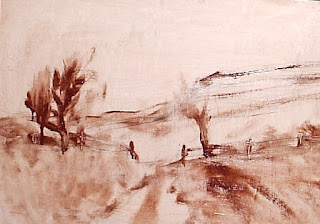 Posted by Robert's reflections at 13:21 No comments:

I very, very rarely paint portraits, but have been asked to paint one of Jeremy Corbyn, ex-leader of the Labour Party and currently suspended from the Parliamentary Labour Party as a result of seeming to forget he owed a touch of loyalty to the new leader.

So I have mixed feelings about the lad, but nonetheless - we're having a go.

I work agonizingly slowly, especially on a portrait, but here is the initial lay-in.   The challenge here, apart from the obviously wrong shape of the nose, is to avoid making him look as though he's just celebrated his 110th birthday. 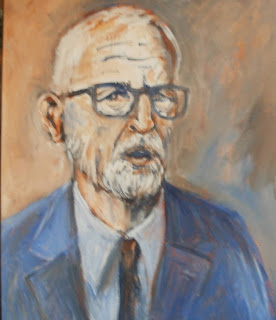 Posted by Robert's reflections at 07:59 No comments:

My mum, pictured here, looked forward to my 70th birthday, bud didn't make it by 4 months, dying at 94.  She said she couldn't believe I was nearly 70.  And I can't believe she's gone.  I shall miss you forever, Nellie Dean - known as 'Dean' for most of her life.  I can't believe you've left us, and I'll never believe you have. 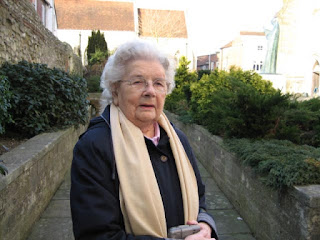 Just realized this blog was ten years old, back in June.

It's never been highly interactive - I know precious few follow it, though some do when I say something controversial, e.g. in criticism of poor old Bob Ross - who is as sacred to some as Jeremy Corbyn is to some in the Labour Party: beyond criticism, or one's being very unfair, and in league with the 'haters' and detractors if one does.

And so here we are, ten years on - years in which I've lost people dear to me; managed to hang on to some despite the ravages of illness and time; gone back to a job I gave up long ago, because a) there was a vacancy, b) I trust no one else to do it.  I've concentrated on watercolour, acrylic, and oil painting. I have dabbled in gouache (please, don't call it 'gauche': it isn't 'gauche' - that means either left, in yer actual French, or clumsy: and you do try not be gauche with gouache), I've written an e-book (which needs updating), I've found a source of lead white paint, which is so important for anyone serious about painting in oil, I've discovered the real Bible of oil painting in Virgil Elliott's "Traditional Oil Painting", and I've become a member of the National Association of Painters in Acrylic.

And I shall shortly turn - if spared! - 70.   Just a pity that there's a 16 year old in my head, who keeps wondering what happened to his body.  I have not made my fortune.  I don't really care about that.  I have become an old age pensioner, and I don't really care about that, either.  In fact, I've stopped bothering about trivial things.   I paint because I enjoy painting,and discovering new things: and there's always something new to be discovered, not because I wish for fame or fortune (and just as well: neither seem within reach), but because I just see things I want to represent, while there's still time.

We now have Brexit, and Covid-19 - these are not trivial; both are self-inflicted.   We didn't have them ten years ago.  But ten years hence, we shan't have them, either.  We'll have other crises.  The one that bothers me most is the threat to the global environment; not the threat to human existence - I'd like to think that my great niece and great nephew have a future, but think the human species has inflicted so much cruel damage on the world in its relentless search for advantage that our disappearance as a species would be no tragedy; perhaps my descendants will survive when others won't, and re-shape the world.  Someone has to, though it's a harsh responsibility with which to burden them.

I wonder if this blog will still be here in another ten years' time, or - on which that's rather contingent - whether I shall still be here either.  Well, who knows?  If nothing really dies on the internet, I shan't die either.  Now - isn't that a comfort?  Isn't it?  Well of course it is!  You know it is!

This is an oil on birchwood panel of Thorness Bay on the Isle of Wight, loosely translated from a friend's photograph and kept simple - or as simple as I could.

I've rarely painted on wood - by comparison with paintings on canvas board, canvas, MDF, hardboard - and it was an interesting experience at this scale; because when I have painted on wood, it was usually on cigar-box lids, at around a quarter the size of this one.

I have a few more, and will see if I get on with them.  On the whole, my favourite oil painting surface at the moment is the Ampersand panel - of which I do not have a supply just now....  On my Next Purchase list, though. 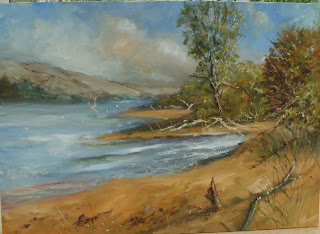 Posted by Robert's reflections at 13:40 2 comments:

The Dead Sycamore in the garden

This one in memory of my mother, Nellie Elizabeth Jones, always known as "Dean", who died a few days ago in Southampton Hospital, at the age of 94. 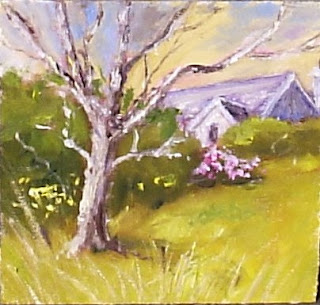 Posted by Robert's reflections at 15:09 No comments:

New painting, and a drawing In Memoriam

Unusual format for me, but here's a 20" by 8" acrylic painting of a dead tree in the garden, which has all sorts of further possibilities to explore - I'm anticipating a series.   And, on a less happy note, a drawing in conté crayon of the marker - an old tree stump - of my landlady's grave.

Pat Mann was born in 1930, as Patricia Morris.  Educated by nuns in Doncaster, and later at art college, when she remembered demonstrating against Sir Alfred Munnings, RA, when he made disparaging remarks about modern painters, including Picasso, some while after the end of the Second World War - a policeman told her to "Move on, and stop being a silly girl".  She didn't mention her reply, so I assume she decided to let reason be the better part of valour.

She was an artist, mother, grandmother; a restorer of antique furniture; she ran with a group of Hash Harriers into her late 70s, earning the name Tanglefoot, since if there were a tree root, or a tangle of briar, she would reliably trip over it every time.

Pat died on June 8th this year, from a final stroke - her funeral was held privately, in the grounds of the house - and she was buried here. 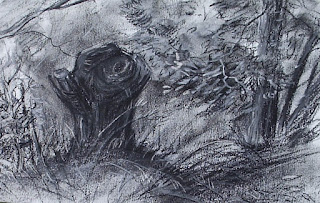 Posted by Robert's reflections at 12:46 No comments:

This 20" by 16" oil on board is a revamp - as the painting dried out, it also became duller, and mere varnish wouldn't have fixed the problem.

So I've .... well, zhooshed it up a bit would be the technical term.

It was always going to be a dark painting - it's a dark place usually - but I'm happier with it now.  The Elephant Hole Cave is partly a natural formation in the rock, and partly excavated by man - quite when, and for what purpose, I've yet to be able to ascertain. 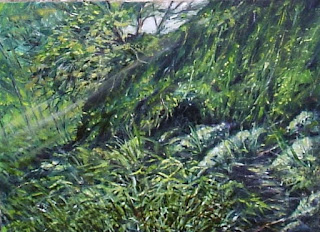 Posted by Robert's reflections at 05:59 No comments:

First one for a long time - more to follow.

Getting back into painting required a limbering-up exercise: it's been over a year since I painted anything other than the occasional birthday card; took up a Labour Party job .... too much for a kid of my age to manage on top of sustaining a painting output: something had to give - and painting did.

Lockdown, therefore, has had its benefits.  Retirement from bureaucratic entanglements would have more....

This is a painting in oil, 16" by 12" (we don't do metric..) which I did to refresh my painting skills - I say nothing at all for it as a painting in its own right: it's too fussy, and has other faults.  But the figure within is myself - and what COULD be lovelier? 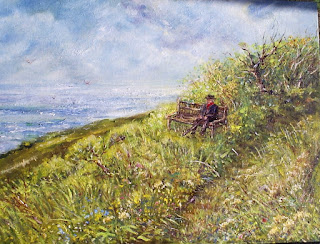 Posted by Robert's reflections at 09:47 No comments: 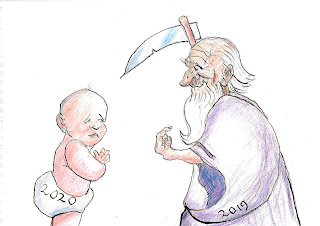 But if you can face it, Happy New Year.
Posted by Robert's reflections at 08:39 2 comments: