Well, there's an error on the Gallery page - images are pixellated - but at last I've managed to upload my new files to the Buy page of http://www.isleofwightlandscapes.net.   So take a look - and better still, BUY something.

My new 24" monitor helped, because my vision is poor, and I must record my thanks to 3iX web-hosting, and the Serif online web community, for a LOT of help.

And now, flushed with success (but determined to fix the errors later) I'm off to bed - where I shall sleep without that crippling feeling of guilt which my web-funk has been causing me for so long. 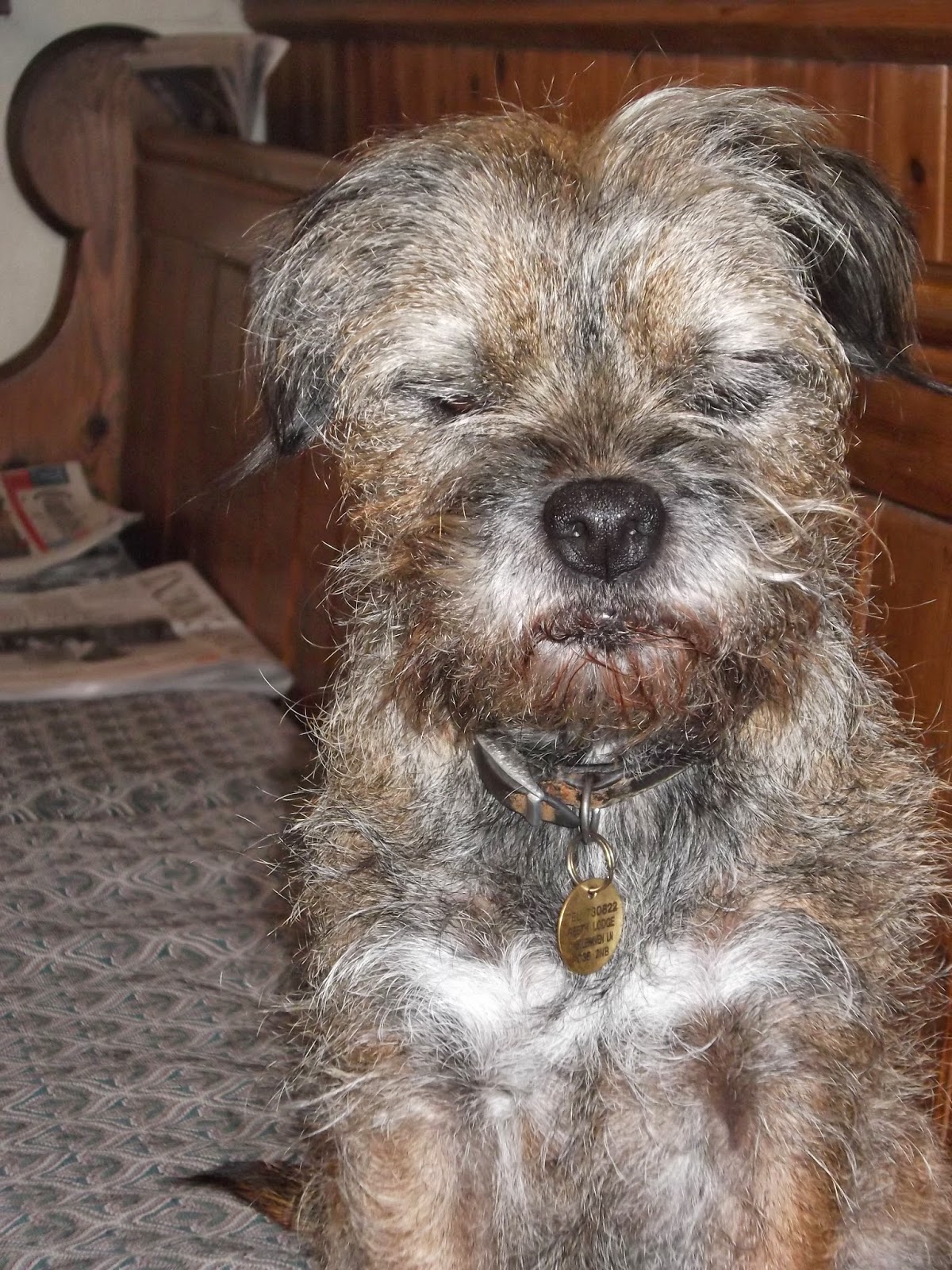 And here's a photo of Charlie, my landlord's little Border Terrier, looking tremendously impressed by my cleverness.....

Posted by Robert's reflections at 15:00 4 comments:

For several years now, my website at www.isleofwightlandscapes.net has lain in the doldrums.  The man who built it for me also maintained it until 2009 or so, at which point he couldn't do it any longer because of his own work commitments: and even though I offered to pay him, he still couldn't do it and so passed on to me all the log-in details and information he thought I'd need.

Unfortunately ..... I had a computer crash thereafter, and lost a large amount of information, plus the programme with which the site had been built.  I bought a new copy of the software, but of course I had to configure it myself - and here's where the problems began.  For those of you who know one end of a website from another, the FTP details were wrong ...... however many times I tried to get them right, I still got them wrong.  And in the end, realizing I was succeeding only in thrusting my blood pressure upwards (it's still a bit high now) I just stopped trying.  Didn't update it .... and of course people who visited it saw nothing new, and didn't stay.

Well: this week, I have made a major effort: I've read through the Serif WebPlus software.  I've corresponded with Tech Support at 3iX web-hosting.  I've asked questions on the Serif community website.  And very helpful they've all been.

I THINK I now stand a chance of being able not only to change the website, but also - tra la! - to publish it.  Which is where the big problem lay.

I haven't done it yet.  It's a job I'm saving for the coming week.  But if I succeed, we should all know very shortly.  If I don't - I'll scrap it, and buy myself a new one where most of the work is done for you.  There are a few of these, to which I've been pointed.    It will be an admission of failure if I have to do that, so if I admit to my problems here, in public, it'll give me the impetus I need to get it right.  Won't it? 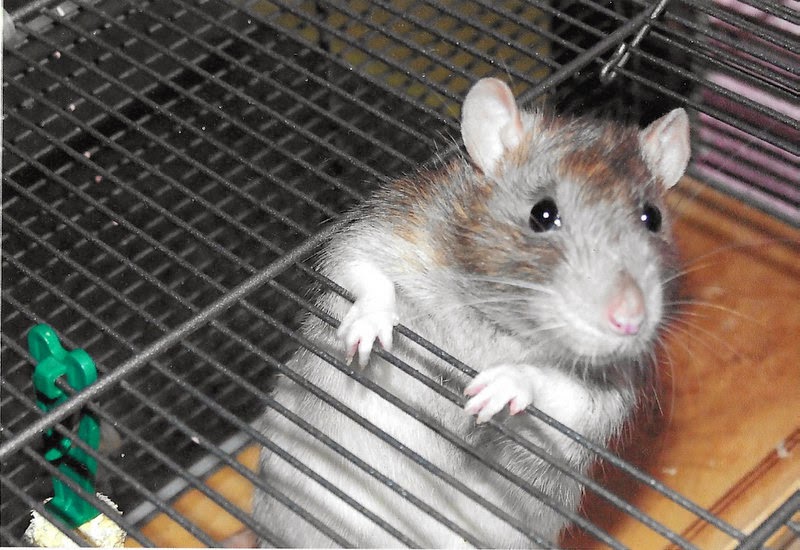 And in the meantime, here's a picture of the late Lee, the Wonder-rat.
Posted by Robert's reflections at 10:02 No comments:

You've heard of glazing, and scumbling.  Velatura is another art term.  It means applying a semi-opaque layer of paint, usually but not exclusively oil paint, over another, and it's not a term I explained in my e-book Oil Paint Basics (still available from the Amazon Kindle store.   When I produce a revised edition, I'll add it.)

Velatura is the application of a layer of paint that part obscures the paint over which it's applied: it doesn't completely obscure it, and is most often employed in portraiture.  It can be very effective, and will often be facilitated with Zinc White, although it can be applied just as well with thinned Titanium White.

It isn't actually necessary that you know these terms: many of us have long since applied the techniques without knowing what words might describe them: and anyway, what makes the term 'en plein air' any better than 'out of doors' painting?  But it may help to know what it means when reading art books without having recourse to the dictionary.   If you've ever painted a portrait, you've probably applied the technique without knowing the words to describe it: now and then, though, the words can alert you to a technique you wouldn't otherwise have thought of trying.

But find him first.  Actually, he's not that hard to spot.   Got fed up with the leafless trees of this time of year, so dug a summer sketch out of my archive and painted it in oil. 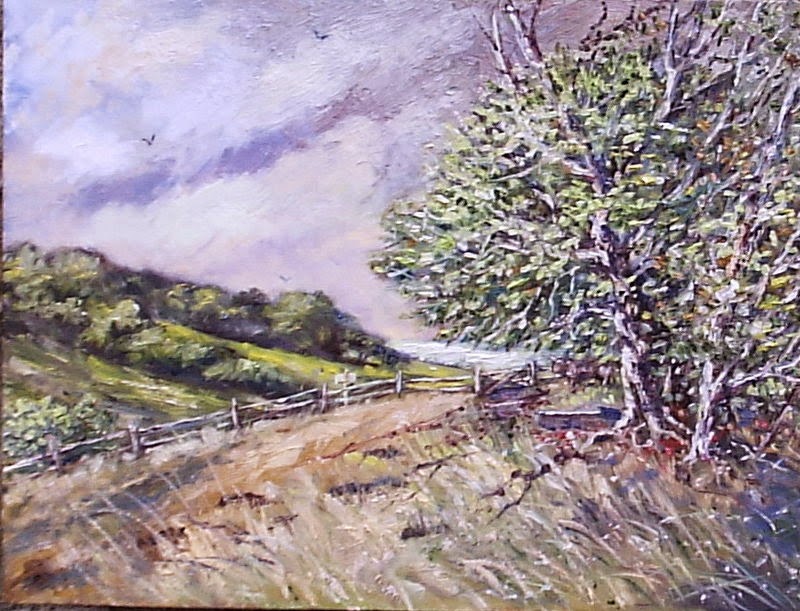 Posted by Robert's reflections at 07:00 No comments: