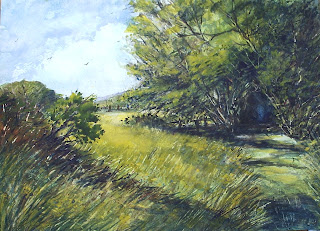 Here's a painting in which I tried to do things you're not supposed to be able to do in watercolour - namely, taking things out, painting light over dark, using opaque paint. I may have got a bit more interested in the process than in the finished product - don't know. Need, as always, time to think about that. But I think it's more or less what I intended to do - not something one can ever be too confident of achieving in any medium.
There are tutors who will tell you all of the above "don'ts" in watercolour; adding, with insufferable smugness, "of course, we don't use white in watercolour" (or black). What they do tend to employ, however, is masking fluid - which I loathe; not only because it destroys brushes, but because it can give a dangerously cardboard cut-out look (although in the right hands, it can work brilliantly; I'm just a bit prejudiced).
Well in this painting, which for the moment we'll call The Path, I included detail and washed it out again - I defy you to find it. I didn't use white, and in fact rarely do, but did employ Naples Yellow, which contains white and is thus opaque, and mixed it with Cadmium Yellow, which is also more or less opaque (no watercolour is totally opaque, but these two are more so than most). And using these opaque yellows, I painted light over dark. I did plan the painting - so didn't just slosh the paint on and hope for the best. But I like to think I broke most of the purists' rules, without using any kind of masking.
Sheer devilment - I do hate to be told what I can and can't do, in painting and in anything else.
This is, of course, a watercolour, on Bockingford 38 by 28cm 300gsm Rough.
Posted by Robert's reflections at 05:50 6 comments: 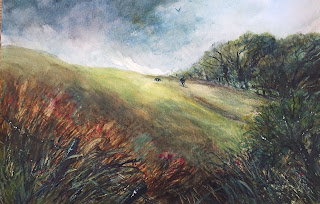 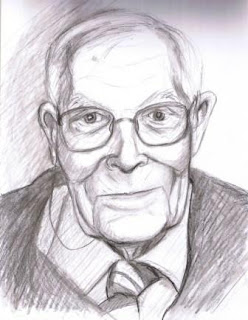 Sometimes I worry that I'm losing my marbles entirely; this morning, for example, I completely forgot how to access my blog... didn't have a clue what to do. For anyone impressed by the fact that I maintain a website at www.isleofwightlandscapes.net, I have to confess that a friend does it all for me... you can guess why. Unfortunately, his computer is currently down - so there's not likely to be a huge amount of activity going on there, just at the moment.
Oh dear.... typical artistic temperament and mentality, or senile decay? Could so easily be the latter.... And I'm not (quite) 60 yet...
My friend the novelist Edward Upward, on the other hand, was entirely in control of all of his faculties until the last few years of his very long life - 1903 to 2009. I sketched him from a photograph (courtesy of the Allinson family) the other day, and although it's a touch on the cartoon side, I thought I'd show it here, as a mark of affection for a man I'll never forget. Google Edward Upward and you'll find a website devoted to him, on which appears the full text of his greatest work, The Spiral Ascent.
While I'm at it, I'll also show a recent watercolour - Walking the dog turns to running from the storm; one of my dark ones....
Did I mention that all work is for sale (I just bet I did.... email me at robertjones@ratville.freeserve.co.uk - why ratville? I used to keep rats. Splendid things; you should get a couple.
Posted by Robert's reflections at 04:30 No comments: