Did this little one, on a cigar box lid, as a study for a bigger painting - in the event, I like it a lot more than the bigger painting, in which I changed the colour and, as I sometimes do, tightened up a bit too much. 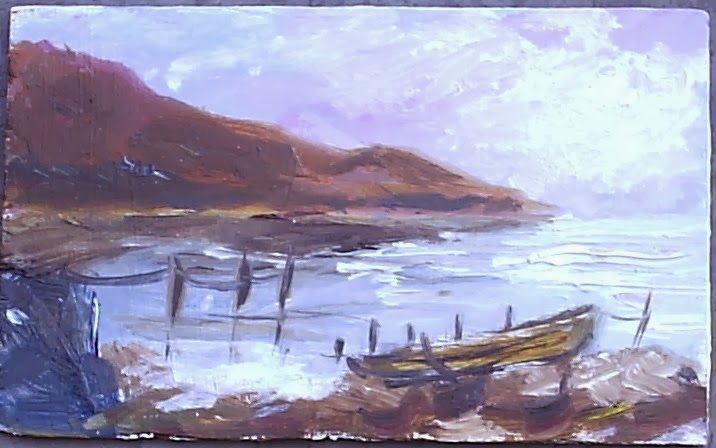 Posted by Robert's reflections at 07:37 No comments:

Well, not Bob himself - sadly no longer with us - but one of his admirers, or at least someone who doesn't share my hostility to the Bob Ross method, has replied to a blog post of mine back in August 2012.  I had more comments on that post - a mix of views - than on any other I've put on here.  I imagine that's simply because people Google Bob's name, and this blog post crops up eventually.

Let's get it right, though.  Bob Ross did what Bob Ross did - and I don't have any trouble with that; I even liked one of his paintings; sadly it was just the one - he seemed less concerned with painting a 'scene' in the one I liked; a study of trees and shrubbery: it's the big landscapes, the repetitive nature of which I find dark, on the one hand, and unconvincing on the other, that put me off.

I've answered the comment, for anyone who'd like to trawl back to August 2010 to take a look, making the point that it's not the man but the school of painting that has flowed from his tv series back in the 80s that's the trouble.

There are Certified Bob Ross Instructors out there who seem oblivious to the actual world around them, and teach an unvarying method, which produces dingy, dark paintings of the sort you might see on the wall in gilt frames in the darker corners of rather old-fashioned hotels.  They're dingy because of the method of their construction - and there is a strictly limited range of subjects, consisting invariably of  mountains, lakes, forests, culled from the master's own works.  It's a sealed, closed world, of same-y subjects.

My commenter/correspondent says that painting is an enjoyable hobby, and by extension I take it he or she thinks that it need have no link to anything real; it can be just what you enjoy doing...  I can understand that, and this is why painting-by-numbers was popular once upon a time (still is, for all I know).  But make it your world, not someone else's, if that's what painting means to you.  The Bob Ross school teaches nothing but a method - 'anyone can paint', they say (not that they're alone in that).  And true, anyone can.  But a) I don't quite grasp why you'd want your paintings to look like someone else's, right down to the way the sea hits a beach, and b) I'm not a hobby painter - I don't do it because it's enjoyable, though probably wouldn't do it if it wasn't: I do it to learn more about painting.  And I'm not going to learn that from the Bob Ross school - unless there are tutors out there who are very much better than the majority and allow their students to do something original rather than copy a pattern.

I shall take another long holiday from Bob Ross now, and get back to other matters - whenever the light is good enough for me to take a decent photograph of what I've been painting.

In the meantime, have a hedgehog, and a Happy New Year. 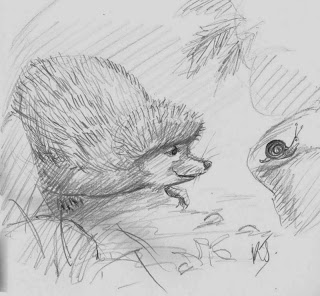