Acrylic comparison, and a new watercolour (when I said I'd stop..)

Here is a (Chromacolour) acrylic version of the not very good watercolour below - just to show the comparison between the two media, and that acrylic can be used in what Alwyn Crawshaw called a "watercoloury way". 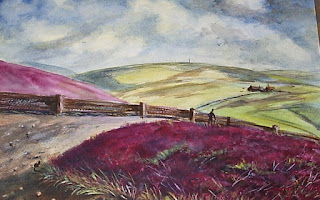 From Headon Warren to Tennyson Down.

I'm not sure this is really finished, frankly - but while it's a bit more topographically accurate than the watercolour version, I got a bit bored with it.  Looking at it in thumbnail proportions prior to posting, I think it could do with darker tone in the greens in the right middle ground: but that would have brought about several more problems in relation to the fence and the purple of the heather, and on the whole - well, I wasn't in the mood to do much about it beyond this point.  So it'll have to stand as is, or go down fighting.

And although I swore I would take a temporary rest from watercolour, I got a tube of Pthalo Blue from Jackson's, and had to try it - from which grew another painting: see below...... 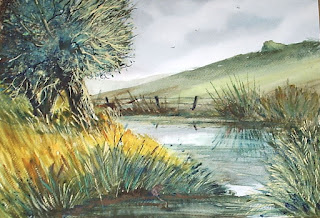 Quarter imperial watercolour  (ie, 15" by 11").  I hadn't intended to paint this at all, just to try out the Pthalo Blue, but it's such a gorgeous colour, and mixes so well, that it grew under the brush.  For good or ill.....
Posted by Robert's reflections at 07:17 No comments:

Two rather dull paintings - We must move on!

The problem with remaining stuck in a groove is that the quality of one's work doesn't get better through sheer repetition but tends to slide downhill.

These are two that slid.

I don't believe in hiding the duller stuff from people, because with any luck we can all learn something from the ones that didn't come off - possibly rather more than we learn from those that did.  And you never know, somebody may have a higher view of these than I have: if so, don't hesitate to make me a foolishly generous offer for them.  I'll pack them up with devoted care and speed them to  you.  But if these were by anyone else, I'd find them dull - and in both cases, the composition is the big problem. 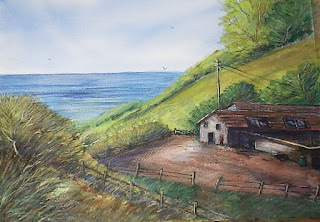 In this one, for instance - which started out as a watercolour but has had a bit of work done  ( not plastic surgery, but a touch of ink and coloured pencil) - we've got a rather unexciting subject to start with, made worse by that lump of blue sea which just isn't doing anything.  I don't think that composition was ever going to work, and the fact that it looks a bit like a stage-set isn't helping: it looks like scenery, rather than a scene, if that makes any sense. 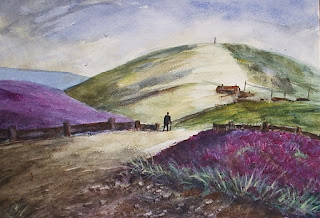 The second one, which is all watercolour, is perhaps a little better -  the reason I'm disappointed with it, though, is its departure from the actual scene;  the distant downs are nowhere near as prominent, nor as symmetrical, as I've painted them.  It was, to be fair to myself, a test piece on which I tried a brand of watercolours new to me (daveliou: made in China, available on Amazon.  The paints worked fine, once I got used to them - this isn't the place to go any further into that, but you'll find my review on Amazon UK if interested).  It's also a bit on the "tight" side - a freer hand with the brush might have paid off here.   The distant buildings are out of proportion, as well, giving a slightly weird impression of scale: it would have been better to have left them out.

Thing is - one lives and learns, all the time: if you make a mistake in watercolour it will show because it's very hard to conceal it; certainly, if you make a mistake right at the preliminary drawing stage, you're on a loser with watercolour because there's so little you can do to put it right.  Better to scrap the drawing and start again: the trouble is, one doesn't always notice at that stage.  Which is a good argument for making lots of sketches and studies before you ever get round to pulling the paints out.

I've taken watercolour about as far as I can at the moment, certainly on this paper (Fabriano 140lb).  Flogging away at it isn't going to help, so I've bought some more Chromacolour acrylic, and will be painting in acrylic, and oil, for a while.  I'll certainly come back to watercolour: but I need a rest from it for a few months.  (Trouble is, it does tempt you back!)

Posted by Robert's reflections at 09:53 No comments:

Idleness being foreign to one's nature - pause for mirth - I have two more watercolours to offer: one being rough and, I think, energetic, the other involving a complete change of palette - I watched one of Charles Evans' demonstrations on YouTube the other day ... I know he's an artist who demonstrates on behalf of Winsor and Newton but I think his comment that you  should only ever use artists' quality paint is right: I've been experimenting with some other brands recently, and next to W & N artists' quality they just don't work.....

You might wonder why not - it's true that a good painter can make use of just about any materials, from student quality paint to tea or coffee used as dilute ink.  But while cheap and cheerful materials are easier on the pocket in the short term, they just make life so much more difficult that it takes a lot of the pleasure out of painting.  Colours aren't intense enough - paint has a sluggish tendency and pronounced unwillingness to spread on the paper - and to cap it all they fade.

Good paint makes good work possible: it doesn't make it inevitable, but at least you're giving yourself a chance - working with inferior materials, be that paint, brushes, paper, canvas, just makes the job so much harder than it need be: and in the end, there's no saving in that.

Use the best you can get. 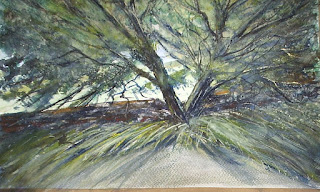 The Broken Wall I -
ignore the gum strip at the bottom!  Must invest in a few mounts....  This is the rough and energetic one. 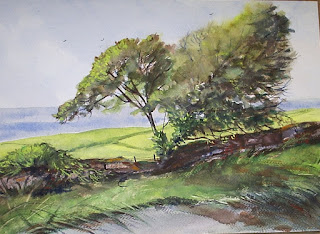 The Broken Wall II -
And this is the different palette: principally in terms of the yellows; I've not used Lemon Yellow for some time, but employed it here; and I also used Venetian Red rather than Burnt Sienna as my red-brown.
Posted by Robert's reflections at 00:40 No comments: