If you were about to telephone me - don't, please.  There's a line fault following the storm, and every time the phone rings it cuts out the broadband.  And I can't hear anything anyway.

I've reported it to EE/Orange, but it takes them a day and an age to work out there might actually be an external fault and to contact the engineers.

Email me as usual - with any luck, they'll get through.....
Posted by Robert's reflections at 06:49 No comments:

Scrolling down, you'll find the work in progress of this gentleman (the oil version).

This is just about the final version, glazing added.

I don't suppose he's very commercial, but if anyone is interested - make me an offer (for anything on the blog, if it comes to that). 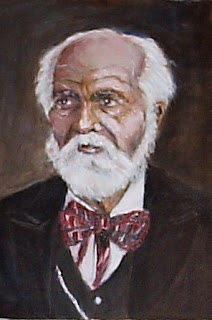 Posted by Robert's reflections at 09:14 No comments:

A quick note - www.isleofwightlandscapes.net is now updated, uploaded, up and running, and will be updated frequently in future.

Thanks to Barry Fitzgerald for all his help - uploading was nightmareish, but with some help from 3iX, the web-provider, he got there in the end.  I have to say "he" got there, because I was just hovering in the background making keening noises for much of the time.

But it's up there now - all revised, squeaky and shiny.
Posted by Robert's reflections at 03:49 No comments:

While waiting a) to upload my revised website, b) for the paint to dry on my oil study of JKH, I did an acrylic - somewhat loosely based on him, working on old, small, monochrome photographs taken over a 40 year period isn't easy - using the same build up from monochrome to glazed final result.  I've put it on the Gallery at Painters Online (www.paintersonline.co.uk) as well.

In this one, he's looking straight at you - I got the impression he was trying to tell me something unflattering......... 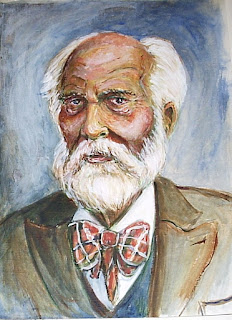 Posted by Robert's reflections at 07:01 No comments:

Fingers crossed as I write this....

For months now, my website has been bedevilled by a problem on the Gallery page - images horribly pixellated and unviewable.  I couldn't work out what was wrong, and in the end I just left www.isleofwightlandscapes.net to fend for itself, and even thought about taking it offline altogether.

A visit today from my old friend Barry Fitzgerald, a professional photographer working out of Tralee in Ireland, will I hope have resolved the problem - and he worked out why it had happened, so it shouldn't go wrong again (it really WASN'T simple).

It's been a long day, and I'm now off to bed: but tomorrow I shall upload the latest version of the site: this always taxes my memory and eyesight and I regularly get the codes/password wrong.  But all things being equal, I am very hopeful that the issue will have been resolved, and I shall be able to start actually using the site again - I had just been staying away in a sort of neurotic sulk....

And all I'll have to do then is publicize it widely so that more people visit it and savour its delights....

Casting about for something to paint, I thought I'd like to try a portrait sketch; it can only be that because its subject has been dead for just over 100 years now.  But I've not painted a portrait of any kind for years, and thought it was time I did.

It's a WIP - Work in Progress - and because I'm using oil paint (on oil painting paper) it won't be finished for a while given the method I've chosen: and I've chosen that so that I can show an old but (I'm hoping) good method of achieving it.

I started out with the most basic possible pencil sketch, strengthened with a"turpsy" (ie, solvent-rich) mix of Burnt Sienna and French Ultramarine oil; then sharpened up the drawing a bit from my source photographs - Hardie changed quite a lot over the years, and looked far older than his 60 years when he died: so we're only going to get a sort of composite painting out of this (I suppose that's going to read a bit like an excuse, but it's basically an iconic look I've after with this, so if it does, it does!).

Having blocked in some of the  background and shadows, I employed that old approach I mentioned - rather than going in with full colour, I refined the image a bit more with a mixture of Terre Verte, a very traditional colour historically used for this purpose, and lead white - I still have some Flake White left, which is what I used.  It's less oily and much faster drying than Titanium White, and can be applied more thinly.  There's a long story to be told about the advantages of lead white, but this isn't maybe the time to tell it.

Now this layer has to dry right out, which will take time: and when it has, I'll apply thin, transparent glazes of colour over the top.  You needn't fear you'll obscure the detail - you'd only do that if you used very opaque colour, and Titanium White.

There will probably be some Titanium White eventually, but the aim is to keep it to the minimum - and maybe I'll be better advised to use another lead white instead.

For the moment, the painting looks as if I've turned poor old Keir, as if he hadn't enough to contend with, into the Incredible Hulk, because Terre Verte is a green, with a very low tinting strength: it will cool warmer colours applied on top - and it's one of the ways that the old painters indicated gentle shifts in colour and tone in their portraits.  Probably obviously, the finished product won't be as good as a genuine old portrait - because I'm not going to take the time over it that they would have done, and anyway I'm using paper; but my desire is to give others an idea; and of course it's good practice for me; it'll be interesting to see how it pans out.

Building up a portrait in this way - you can do the same with landscapes if you want, but you probably wouldn't use Terre Verte as your base colour; it wouldn't hurt if you did, but it might end up with a rather cool painting; an earth red would be more usual; and you can employ acrylics if you prefer quicker results - gives a very distinctive look; it's not an Impressionist treatment, but now and then maybe it's good to remember that not everything has to be. 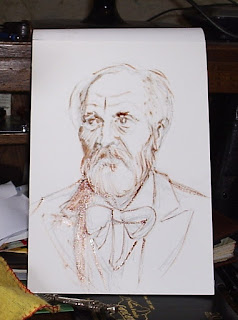 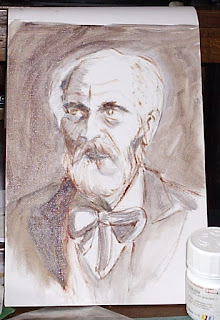 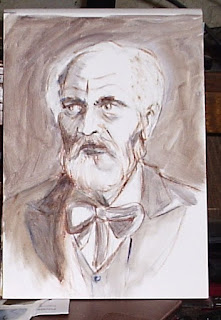 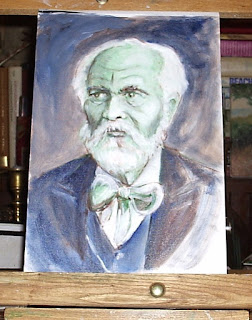 Posted by Robert's reflections at 10:11 No comments: